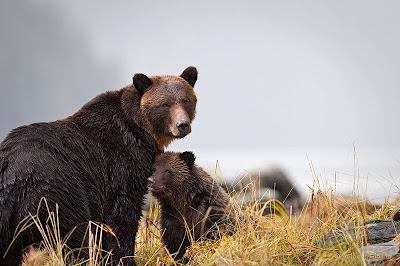 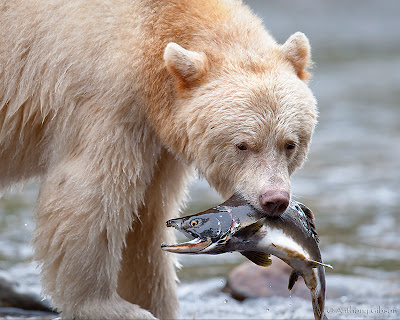 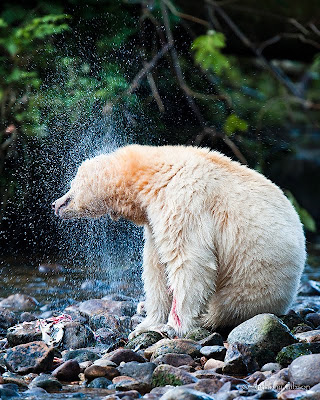 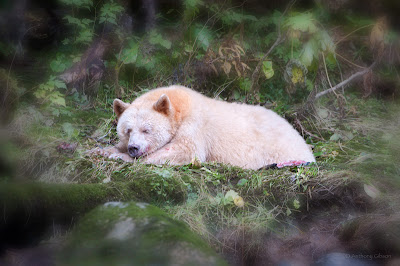 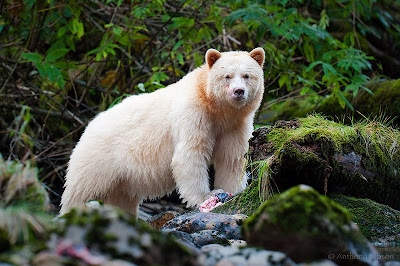 I have returned from my adventure searching for the very rare white Spirit Bear in the Great Bear Rainforest along the Pacific Coast of British Columbia. I returned home to orders collected from the September shows that had to wait until after my trip. Collectors are always excited to receive their new artwork, so I do my best to get them out as quickly as possible. As of today, all orders are completed and my life is beginning to settle down for the moment. If all continues according to plan, I will have time between a few scattered engagements to catch up on many images that people have been excited to finally see. However, for the moment I would like to take the time to share my experience in the Great Bear Rainforest, which was truly one of the greatest Nature experiences I have ever had.

When one starts spending a lot of time observing and photographing wildlife, it is very easy to become accustomed to the excitement and adrenalin of capturing images of wildlife in their natural habitat. In the beginning there is that rush of “I can’t believe I got that close” or “I can’t believe I stumbled upon that.” Over time, one begins learning behavior and therefore adapts to allow for better approaching the subjects which in return allows for consistently better images. So, even though you are witnessing wonderful natural wildlife behavior, it becomes more difficult to “Wow” one’s self or make some lasting impression that one will always carry with them. This trip into the Great Bear Rainforest not only “wowed” me, but has given me a much deeper understanding of bears and seeded an even deeper respect for wildlife.

I worked with a very small group of 5 other excellent photographers, and our guide and Captain of the Oceanlight II with more than 30 years experience exploring this region and working with bears. When I decided to go on this trip, it was with the intent of capturing something rarely seen (Spirit Bears), but also having the opportunity to try and capture some nice wildlife art of beloved species like the Grizzly and Black Bears. I had no idea of the proximity I would be to these bears. What was truly amazing, it took several days before I realized it was happening, was that we were not just close to these bears, but we were among them. These animals actually accepted our presence and continued with their behavior as if we were part of their environment. Even though these animals are a very large apex predator, they are easily frightened and avoid danger at all costs. So, they will quickly disappear into the trees if they feel threatened in any way. During this time of year they are feeding on Salmon in the many streams and inlets of the region, which means there is no place for us to hide and observe them. We had to stand in the open or work from Zodiacs to be able to photograph them. In that situation, it is up to the bears to approach us which means they have to trust us. These bears would walk by and eventually get closer and closer, but we didn’t realize we had earned their trust until they would actually turn their back to us while being fairly close. While not the most attractive view for a photographer, it was encouraging because we knew eventually they would turn and might approach closer. It wasn’t until the second to last day that I realized that we were actually “among” the bears and not just watching them. We had the good fortune to find a Mother Grizzly with a first year cub in one of the inlets. Over a couple of days of working in this inlet, we would see her from a distance constantly keeping an eye on us. She would come in close enough for us to get distant images of her and her cub, but always remained alert and on the move. On our last afternoon, all of a sudden, she decided we were “ok.” Her ears laid back and she brought her cub within fifty feet of us and lazily feed on fish and sat around. The sun came out (it is a RAINforest) to add a little magic to the moment. She had accepted us as part of her environment for the moment.

Being among the bears for an extended period of time like this allows one to really get a close look at the behavior and interaction of these animals. You can see the expressions change on their faces, and the emotions and tensions expressed between them. Watching the interaction between not only the bears, but between the bears and us was truly astonishing. The human like emotions displayed between them has made a lasting impression on me that I will never forget, and has changed the way I will view wildlife of any kind in the future. Over the next several weeks I hope to post a large number of images that will portray some of the qualities I have told you about, so maybe you will be fortunate enough to see a glimpse of what I witnessed.
More to come, so stay tuned…………………….
Posted by Anthony Gibson at 7:40 PM No comments: