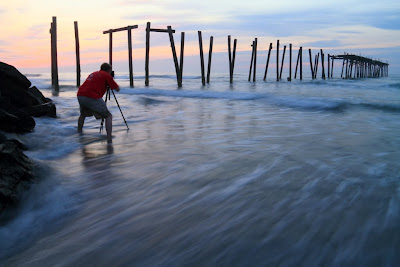 I was recently in Ocean City, New Jersey with my family. While I always take some photographic equipment along on vacations, it always ends up being hard to find time to scout for locations and get back to shoot when conditions are right. Especially when you have young children along...as I am sure most parents can relate to this. We were walking the beach one evening after dinner when we stumbled upon this old fishing pier that had been abandoned long ago. There were other piers along the newer areas on the boardwalk, and they were always packed with people. It made me wonder why this pier had been left for the sea to slowly tear down. At the same time, it is still a popular site to see and people would wander down there to take a look at the old pier. I instantly knew I had to try and capture this wonderful relic.
I knew that the sky was going to make or break the image because there needed to be a sense of movement both above and below the pier to convey the ghostly isolation of this old structure. Luckily, there had been clouds and fronts moving through just about the entire time I was there. The problem with that is a lot of the times the clouds will block the sunrise until it is too high in the sky and you will lose the first light "glow" and colors. That is exactly what happened the first morning, but the second morning (last day of my trip) mother nature came through for me.
There were many nice compositions using the rocks and the shore, but I decided that I wanted this image to just be about the beauty of this broken down pier. I also wanted to enhance the mood and isolation with movement in the clouds and the surf, luck also provided a nice mist in the air to aid in my goal. I waded out into the surf and composed very close to the pier at 16mm with a 5 stop density filter to kick my exposure time up to 25 seconds. This long exposure time would cause the surf to blur together and the clouds to streak just a bit. In order to keep the tripod still enough in the surf for such a long exposure I had to almost fully extend the legs and sink them deep into the sand, then give the tides time to settle the sand around them (a very quick way to ensure your tripod never opens/closes well again without breaking apart every part to clean out the sand). The clouds were still thick on the horizon so it took a moment for the sun to clear them which left only a few moments of the warm first light before the sun was to high. At 25sec exposures, I only got 3 shots before the magic was gone and everything in the sky brightened up. This was the first of the 3, a single exposure processed twice and blended together.

I would also like to say thank you to Jim Walton, a young kid who has a passion for photography that is very rare for his age. There are few teenagers that will rise at 4:00 AM and ride their bike several miles to take a picture. Not only did he do it once, but he was there the second morning trying again just as I was. He was kind enough to take the above picture of me just after the magic moments had passed and I began moving around trying to capture other perspectives, you can still see a hint of the early morning colors in the distance. He sent it in a email and I had no idea he even took my picture. Thanks bud, and keep shooting!

Posted by Anthony Gibson at 9:16 AM No comments: