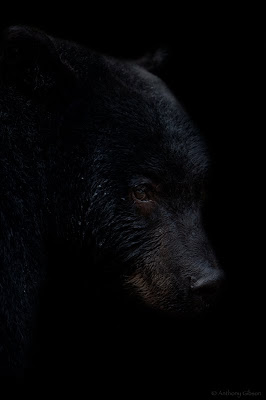 Anthony is once again honored to announce that he has won the People's Choice Award in the 2010 Olney Arts Council's Fine Art Show for the second year in a row. He is both humbled and honored that the general public, who could have voted for any of the amazing pieces of artwork from all mediums, chose Anthony's "Shadow" as their favorite. I have said before that I am not a fan of competitions because of how easily one can get wrapped in the desire to win and become critical of others, but in the end you are subject to another's opinion and views. That is not what art should be about. I create prints because I am inspired to do so, and I love it. The fact that so many find my work appealing amazes and humbles me every day. Anthony would like to thank everyone who attended the show in support of the Olney Arts Council, who have created a friendly atmosphere for people to display their work, and the many talented artists on display.

Posted by Anthony Gibson at 3:04 PM No comments: 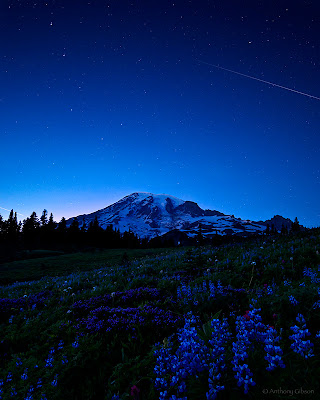 I am very pleased to announce my latest release "Wishes" from my Oregon/Washington trip this summer. Capturing a shooting star with a camera is a very rare thing, but capturing two is truly once in a lifetime. I consider it to be one of the most magical and amazing images in my collection. There have been many inquiries into the story behind this image, so I thought I would share the tale of that evening with the mountain.

It was taken at Mt. Rainier National Park in the Paradise wildflower fields. We spent an afternoon hiking and scouting for potential images at sunset using Mt. Rainier as a backdrop only to discover that the sky was just "too clear and cloudless" to produce any drama in the sky above the peak. As sunset started to unfold, as expected, I was less than thrilled with sky portion of my images. The weather was gorgeous and the sky was crystal clear, so we decided to hang around for several more hours to do some twilight and night photography over the mountain. I saw the potential for a nice twilight image where the sky turns that deep blue just before dark, stars twinkling, the cool shadowed mountain with the warm alpine glow jut behind it , and the blue lupines scattered throughout meadows. Capturing an image like this is very technically challenging. Each of the components take on their magical "glow and color" qualities at different points throughout the evening, plus enough light needs to be available to account for factors like wind moving the flowers around. In order to put all these pieces together it required blending 4 images together taken at different points over a 4 hour period. First I had to find the composition that would really emphasize the soft glowing blues in the lupines, and ensure everything was setup, in focus, and exactly the way I wanted. Once the process is started, the camera can not be touched or moved. Now that everything was in place I waited until dusk to take the first exposure of the wildflowers. The second exposure was taken about an hour later with the focus shifted to the mountain and the soft glow behind it. Over the course of the next two hours I would take an exposure about every 30 minutes to ensure I captured the sky as the twilight blues turned to black and the stars began to shine bright. At that point it just becomes the difficult task of blending the selected images together to produce what the human eye was actually seeing that evening.

While we were standing around talking between shots, I did notice a shooting star to the left of where we were shooting. It wasn't until I got back to the studio and began sorting through the images that I discovered I had recorded two separate shooting stars throughout the evening. It goes without saying that I instantly knew I had lucked out and found my "drama" for the sky portion of my image. I used the two sky portions with the shooting stars along with the other two foreground images to recreate that evening in one slice of time.

I hope you enjoy this very special addition to my collection, and don't forget to wish upon the falling stars.
Posted by Anthony Gibson at 7:33 AM No comments: 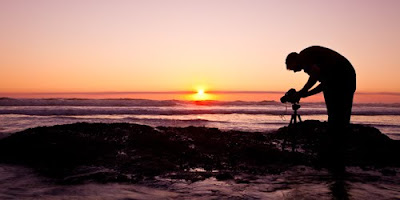 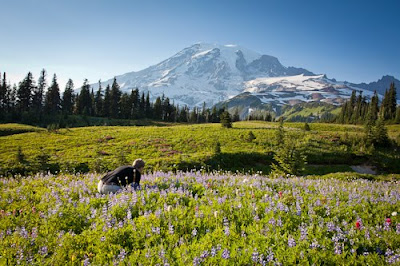 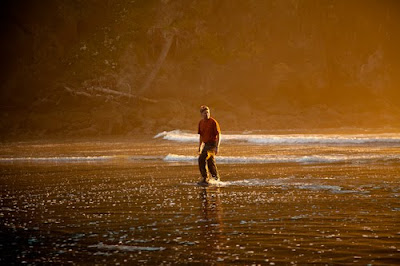 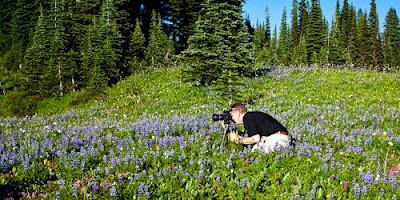 Anthony will be off to the boundary waters of Minnesota during the first week of October. He will be working with several other prominent photographers and producers from the United States and Europe. They will be exploring the fall colors and wildlife by foot, canoe, and car. Stay tuned.............
Posted by Anthony Gibson at 12:07 PM No comments: 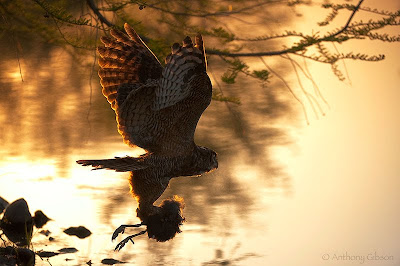 The last several months have been fairly uneventful for Anthony. 2009, while incredibly thrilling and humbling, was quite the ride. The huge international success of his encounter with the lynx; negotiating contracts and image agreements with publishers, agents, and private individuals; exhibits; crawling through slot canyons in the Southwest to walking among the bears of British Columbia all made for a remarkable time. However, by the end of the year Anthony found himself tired and burned out. He decided to take several months off and put his cameras aside to regroup and attend to other important matters. Anthony began to oversee the remodeling of his home in Olney, IL. While not the most relaxing task, he enjoyed designing new elements in his home decor. He focused on nothing but his home and enjoying time with his wife and two young daughters who tormented the workmen on a daily basis. Known for being fairly reclusive anyway, not many saw him for a while.
Inspiration and passion are amazing attributes. Anthony was near completion of his renovations in mid April and was out on a walk around his lake when a young adult Great Horned Owl swooped down and grabbed what appeared to be a Coot. He watched the owl land in a grove of trees were he spent an hour or so listening to the crows squawk and pester him from above. After finally having enough of their torment, he flew to the other side of the lake underneath a spruce tree where he remained for the rest of the day guarding his prize. Intrigued by such unusual behavior from a known nocturnal hunter, Anthony instinctually ran back to the studio and grabbed his camera. He spent an hour or two photographing the owl keeping a watchful eye on it's surroundings until heading back to the house. Anthony spent the better part of the day still intrigued and peering out the windows to see if the owl was still there under the spruce tree. At sunset Anthony began to see all the elements of a great photograph coming together: great warm light, unique behavior, beautiful subject, backlighting, etc. In that moment all his passion and desire to be out shooting returned without even realizing it. He was out till dark working with this owl, and has been working in the studio and shooting steadily since that evening.
Posted by Anthony Gibson at 8:18 AM No comments: